Vote on the Fighter Ballot!

(Controls can be changed in the settings)

Welcome to BanG Dream! ARENA, a fan made fighting game featuring characters and stages from the BanG Dream! franchise. This game has been in development since April of 2019, and I've now decided to start hosting this game on itch.io!

This game is a platform fighter that centers around projectile based gameplay, in which most attacks are delivered by shooting your opponent with projectiles. Each player has access to a close ranged projectile and long ranged projectile, each with a limited amount of ammo. You can also use a bubble shield to defend yourself from attacks. However, if your shield breaks, you will end up hurting yourself.

Aside from basic projectile attacks, each fighter has two specials that are unique to their character. Special attacks do not need ammo, but require you to fill up a power meter which can be filled by dealing damage or receiving damage. Some characters do not have their specials yet as they are unfinished, and they will be marked on the character select screen.

All 35 characters from the BanG Dream! franchise are playable as fighters. The side character Marina Tsukishima also makes an appearance as well! Some characters are unfinished, and will be marked as such on the character select screen.

Aside from BanG Dream! characters, characters from other anime and game series will appear as well. Hatsune Miku, Nico from Love Live!, Monika from Doki Doki Literature Club, Sakura from Zombieland Saga, and even Jotaro and Kakyoin from JoJo's Bizzare Adventure will join the fight as guest fighters!

Different areas from the BanG Dream! franchise will serve as battle arenas for fighters to battle on. From Livehouse CiRCLE to Yamabuki Bakery, each stage has it's own unique layout, so make sure to try them all out and see which one you like best!

Instrumental versions of various BanG Dream! songs and songs that belong to third party franchises can be played as background music during battle.

This is so fun! But can you make the Zombie mode NOT endless? I got to over 1000pts and it kinda got boring because I was able to kill the zombies easily with Nico's special power :/ other than that, great! I made my own game mode called "Protect the PAREO" in Zombies lol

Thanks for the suggestion, I've noticed this problem too with some characters. I'll probably add a limit of 100 zombies sometime in the future.

Bro It's pretty cute the game and I woul love if you can add Speedwagon xd I really love that character and it will be awsome if he were there. Of course this is just a sugestion, the game looks good .Keep going!

Add Kizuna as a playable character.

I'll consider it, thanks for the suggestion!

Thanks, can't wait for her to pull out a spell card in gameplay!

maybe use this as a super?

or anything from here 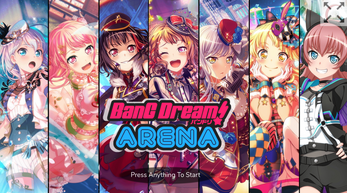 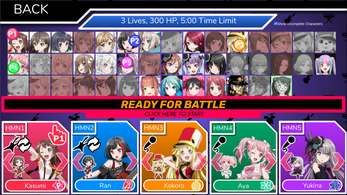 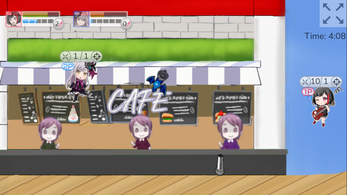 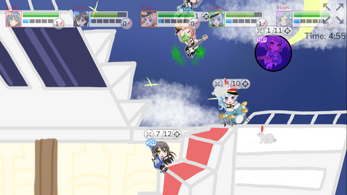 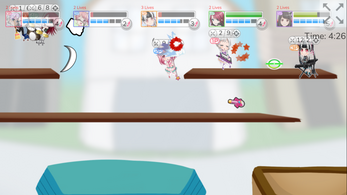